The Grand Isle County Historical Society was formed in 1955 to help with the preservation of the Hyde Log Cabin.  The Society manages the Historic Site and presents programs related to local history.

The Grand Isle Historical site is open every weekend. Friday, Saturday, and Sunday 11-5 from Memorial Day to Columbus Day! 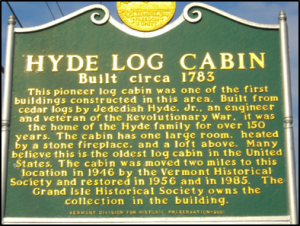